The Federal Writers project (FWP) was begun in 1935 as part of President Franklin D. Roosevelt’s Works Progress Administration (WPA) and continued until 1942 when funding was diverted for WWII (Kennedy, 1990; Dolinar, 2016). The project set out to produce a series of guidebooks, one for each state, that captured the customs and lore of the USA. As Stetson Kennedy (1990) writes in his introduction to the Florida Writers Project for Florida Memory, an ‘army’ of fieldworkers was sent out to gather material from the community. They were instructed to avoid relying on community leaders and to instead favor the insight of working-class individuals, such as the gardener, washerwoman, and older residents.

One of the best-known projects completed by the FWP was the recording of more than 2,300 narratives from formerly enslaved individuals across the country (Dolinar, 2016). While the aim of this project was to accurately capture the experiences of enslaved individuals and slavery as a cultural institution, these narratives have since been called into question by historians who recognize the narrow and often prejudiced viewpoint imposed by White fieldworkers. The interviews collected in Florida, however, “are considered more honest accounts of the cruelties of slavery because Florida was one of the few states that employed a unit of Black writers to collect material, according to USF historian Gary Mormino” (Eastman, 2005).  Stetson Kennedy (1990) also recounts how ‘inhibited editors’ left their mark on the stories, folklore, and observations sent in by fieldworks, so that the original field copy often gives the most complete description of what was said and witnessed. 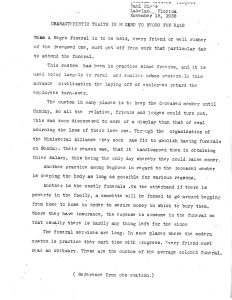 While most of the narratives of previously enslaved individuals and WPA paperwork can be found online as products of the US Federal government, the original field copy can be difficult to access. Some of the original drafts and field copy can be found in the USF Libraries Special Collections. These materials can shed further light on the cultures the FWP were trying to capture by providing extra details not included in the final published projects and perspectives that may have been erased or muted by the editing process.