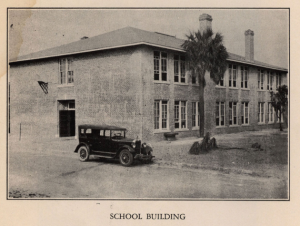 The first graduating class (1927) of Booker T. Washington High School saw massive changes during their four years at the first high school in Hillsborough County, FL available to African Americans.  More than a decade before, Mrs. Blanche Armwood Beatty, a leader in the community and an advocate for education and social reform (Schmidt, 2021), had argued for the Hillsborough County Schools to provide more teachers to the expand the curriculum of Lomax School to accommodate high school level students (Folk, Nadiello, & Peters, 2016).  The Lomax School was one of the most crowded elementary schools serving the African American community in Tampa in the early 1900s (Howard & Howard, 1994). It wasn’t until 1925 that Booker T. Washington High School was established to provide a complete high school experience for students of color, even though it would continue to share buildings on Blanche Street with the Lomax School until 1926-27.  Booker T. Washington High School would remain the only junior high/high school available to African Americans in Hillsborough County for nearly ten years (“School History, n.d.).

-class motto (our aspirations take us to the stars)

Hazlip, editor of the first Booker T. Washington High School yearbook, recounts how the senior class of 1926 began at the Lomax school before sharing the Blanche Street building. Even though the school had been created, it was not easy sailing for the teachers or students. Clemmie James and Ethel Jones, former teachers at the school, recount how funding and facilities were continuous problems for Booker T. Washington High school in their joint oral history recorded as part of the Otis R. Anthony African Americans in Florida Oral History Project. The class of 1926 was the largest class to ever enter Lomax at 49 students but graduated only 12.  Those twelve senior graduates shared their hopes, reminiscences, and thanks to the teachers that guided them in their yearbook: Excelsior:  the senior class annual of Booker T. Washington High School  which was recently digitized as part of the USF Libraries’ Public Domain celebrations. 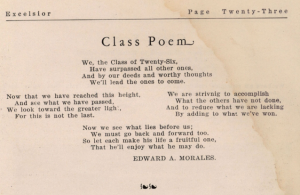 Excelsior 1926 and the oral histories are just a few examples of the materials held at the USF Libraries that record the history of Booker T. Washington High School.  These materials are recognized not only for their historical importance but also for the way in which they capture the personal stories of the young men and women who lived during this time, making these items incredibly valuable to students, teachers, historians, and researchers. In fact, USF students, Margaret Folk, Marco Nadiello, and Jasmine Peters incorporated the 1928 Booker T. Washington High School Yearbook into their project on school desegregation in Florida, which forms part of   ‘“We Wanted Some Basic Human Rights:” The Civil Rights Struggle in Tampa’ exhibit.

The building that once housed Booker T. Washington High School still stands and is used today. After desegregation of the Hillsborough County school district in 1971,  the school was turned into a junior high, then into a 7th grade center in 1972 before being used as a magnet school for international studies during the “middle school conversion of the 1990s.’ Since 2005, it has been used as an elementary school, continuing Mrs. Blanche Armwood Beatty’s desire for it to be a source of education for young members of the community  (“School History, n.d.).